Where do young people invest?

This article tells you what the smart grad about town, has been doing with the spare cash which we want to attract to long-term saving for retirement. Thanks to Ethan Wu of Unhedged  Sign up here to receive Unhedged in your inbox every weekday.

Sam Bankman-Fried should stop giving interviews. In multiple interviews this week, he offered an account of how FTX collapsed that amounted to “I had no idea what I was doing, was constantly making mistakes, and everything that could’ve possibly gone wrong did”. (The FT’s Alex Scaggs has the blow-by-blow.) His account made no sense to us. We’ll see how it holds up after John Ray, FTX’s new chief executive, talks to Congress on December 13.

Bankman-Fried, remember, was crypto’s adult in the room. How far the industry has fallen. Bank of America published this half-serious chart last month (h/t Brent Donnelly): 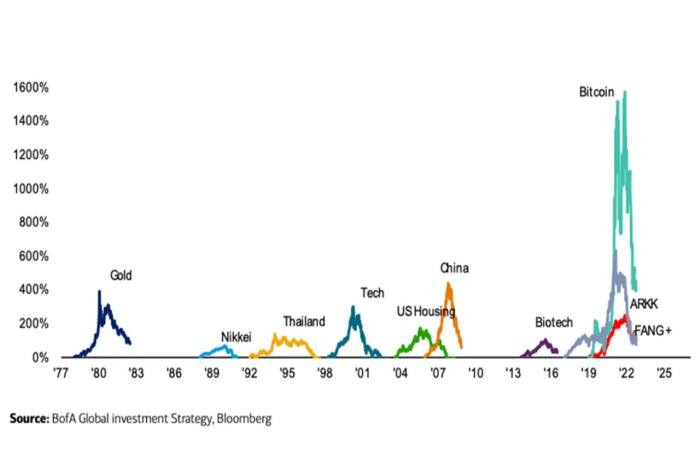 The whole sector is wobbling. Kraken, a major exchange, laid off 30 per cent of staff on Wednesday. Some crypto miners are defaulting on loans as bitcoin’s price sinks below its production cost; lenders are seizing their mining rigs as collateral. Digital Currency Group, a holding company that includes one of crypto’s oldest funds and most important prime brokers, is facing tough questions after Genesis, its prime broker subsidiary, got caught in a liquidity crisis last month. Genesis is reportedly considering bankruptcy.

It was in this context that we read a recent paper from the Bank for International Settlements. The authors looked at usage of over 200 different crypto-trading apps across the world from 2015-22, and their results were ugly:

This is all to say bitcoin is mostly a speculative plaything — no surprise there. But our question is: can a bubble that burnt tens or hundreds of millions of global investors reinflate? (Ethan Wu)

I suggest that if you want to compete for young people’s money, you play the waiting game.

Founder of the Pension PlayPen,, partner of Stella, father of Olly . I am the Pension Plowman
View all posts by henry tapper →
This entry was posted in pensions and tagged bitcoin, FTX. Bookmark the permalink.