Gilt yields “Narratives built while the dust is still in everyone’s eyes could fall apart fast”.

I’m writing (and you may be reading) ahead of the opening of Gilt trading on the Morning of Monday 17th October. There are a number of ways that the market could go;

UK pension schemes have probably done enough to cope with options one and two, but option three remains a worry

Jeremy Hunt has announced an emergency statement on the mini-budget “today”. He has made it  in advance of the markets opening. The pound, trading overseas, benefited from this proactive approach.

The gilt markets opened at 8 with long dated yields falling (good news for pension schemes and the economy.

I may revisit this blog later today and see which of these three directions , the market eventually follows. The best explanation of what is likely to go on , is from Ethan Wu, Robert Armstrong’s assistant – writing in the FT’s morning newsletter. Sign up here to receive Unhedged in your inbox every weekday.

After watching Thursday’s tranquil trading session in UK markets, Unhedged tempted the news gods, writing that the “‘mini-Budget mini-crisis may end with a whimper, not a bang”. Then on Friday, to make us look dumb, Liz Truss fired her chancellor and restored £18bn in corporate tax increases, a fraction of the “mini” Budget’s £43bn in tax cuts. The market reaction was violent: long gilt yields, which had fallen earlier in the day, leapt. Was Truss’s walkback not enough? The market, one analyst told the FT, “was hoping for a lot more”: 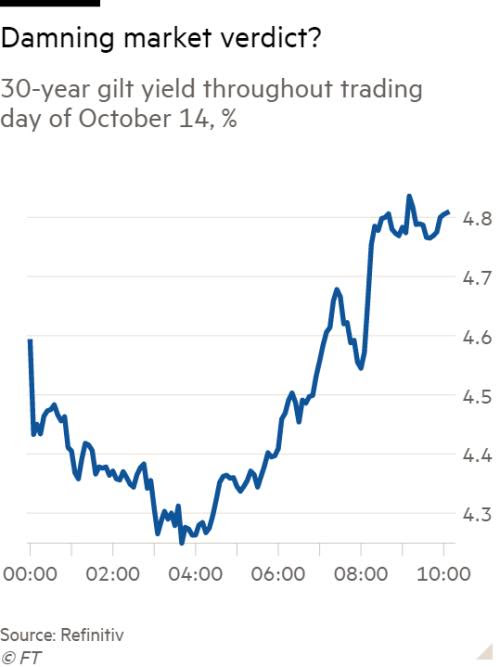 The pound fell too, though the move was measured: 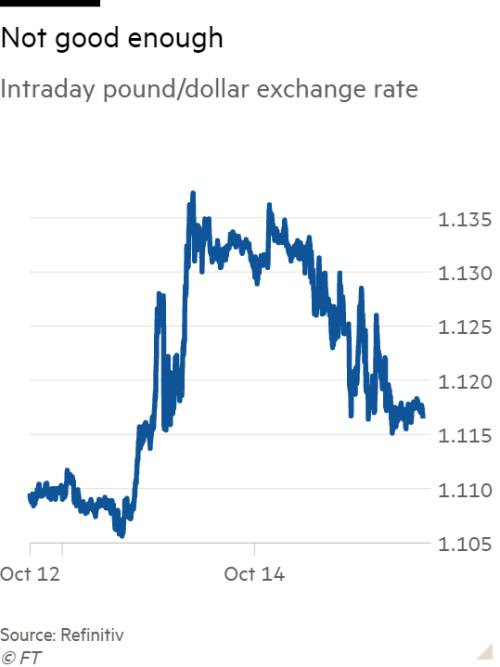 The popular narrative is that Truss failed to convince markets on Friday. Is that quite correct? The logic is compelling. Unless Truss performs another volte-face, £25bn in unfunded tax cuts (and a big energy price guarantee) remain in the pipeline. That would feed inflation, possibly forcing the Bank of England into further rate increases. Gilt yields, then, should follow the BoE up.

We’d offer a note of caution: it is still very hard to distil a clear economic message from moves in UK markets. Forced selling from pension funds may not be over. In fact, UK pension funds are hoarding cash in case of new collateral calls. Add to that a contrary data point from Friday: expectations for the BoE’s terminal rate edged down a bit from 5.5 per cent. That hardly seems like fresh inflation panic.

In a note over the weekend, analysts at Goldman Sachs offer one potential explanation for falling rate expectations despite surging gilt yields. Slowing growth, a higher corporate tax and much tighter financial conditions, they say, make inflation look less menacing, and that spells a lower terminal rate:

The persistence of core inflation and the continued tightness in the labour market suggests that the BoE still needs to take monetary policy into significantly contractionary territory. That said, following PM Truss’s policy reversal we think there is less pressure for the BoE to act aggressively in the coming meetings. We now look for 75bp hikes in November and December (from 100 bps previously), followed by a 50bp hike in February and two 25bp hikes in March and May.

Whether Goldman is right, the point is that UK markets are not straightforwardly legible right now. Gilts, we suspect, are getting swirled around by non-fundamental buying and selling. We’ve yet to see what the market looks like since BoE bond-buying ended Friday.

That applies just as well to the idea, disputed in this column last week, that markets are assigning a risk premium to UK assets. Good to discuss, but needs to be understood tentatively. Narratives built while the dust is still in everyone’s eyes could fall apart fast. (Ethan Wu)

Founder of the Pension PlayPen,, partner of Stella, father of Olly . I am the Pension Plowman
View all posts by henry tapper →
This entry was posted in pensions and tagged gilts, LDI, Unhedged, yields. Bookmark the permalink.

2 Responses to Gilt yields “Narratives built while the dust is still in everyone’s eyes could fall apart fast”.